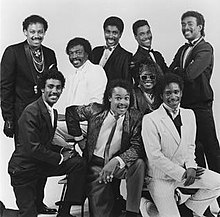 “Computer Love” is a classic by R&B group Zapp. Made in 1985, it’s mostly remembered for its heavy use of the “talkbox,” the voice-altering vocoder which is a 1980s equivalent of Auto Tune. Hip-hop seems to love “Computer Love,” since the song has been sampled and interpolated many times in the genre’s history. Hip-hop music has ties with R&B and funk, and sampling/interpolating “Computer Love” is one way to make that fact more obvious.

This is the first single in Redman’s rap career. Produced by Erick Sermon and Redman himself, it contains many samples, including a cryptic, sped-up piece of Zapp’s “Computer Love.” Unlike others on this list, “Computer Love” does not fill the melody of the entire song. Where is the sample, you ask? In the beginning of “Blow Your Mind,” repeating “Won’t you keep me warm tonight?” a few times.

The Bloods & Crips project, Bangin’ On Wax, was released in 1993, to later be certified gold. One song on that album was “Piru Love,” a gangsta twist on “Computer Love,” slowed down and laced with a more airy vocoder than in “Computer Love.” It is a tribute to LA Bloods, laced with harsh shots at Crips here and there.

A more known rapper to sample “Computer Love” was also from the West Coast, and that was the late Tupac Shakur. In “I Get Around,” you’ll hear “I’ve been around” on almost every other bar, sped up and panned to the right.

In 1994, the late Notorious B.I.G performed “Me and My B****” with his mentor Puff Daddy live in Philadelphia. He didn’t perform the original version from his 1994 debut, Ready to Die. This live version was over a looped instrumental section of the opening of “Computer Love.”

This Vallejo, California quartet puts their own talkbox-heavy twist on “Computer Love,” making it sound like a cover of the original song. Instead of a vocalized repetition of “Computerized” or “Computer Love,” you get “Scandalous” in the hook, sung on a talkbox by Zapp’s Roger Troutman.

There is no sample of “Computer Love” here, only an interpolation. It is the hook sung by AB Money, “I know you’ve been searching for someone…”

Full of talkboxes and a melody similar to “Computer Love,” Pac and his Death Row Records crew rap about a drink called “Thug Passion.” DJ Quik ad-libs with the talkboxes here and there.

This Chicago trio, consisting of Twista, show off their rapid flows over a super-slow version of the instrumental of “Computer Love.” They even add original talkbox harmonies in the hook.

Over an intense beat from Cool & Dre, sounding nothing like “Computer Love,” Fat Joe adds an interpolation of the 1985 R&B classic, saying, “I know you’ve been searching for someone…” This is akin to 2Pac’s “Temptations,” as it serves as the song’s hook.

Similar to the Biggie and Puffy gig in Philly, this artist chooses the opening instrumental loop of “Computer Love” to repeat throughout the song.

Li’l Kim teams up with T-Pain and Charlie Wilson (an original vocalist for “Computer Love”) to make their own tribute to love through computers. T-Pain’s Auto Tuned vocals serve as a modernized form of the talkbox from the ’80s and ’90s. Who better than T-Pain could do that?

As recently as 2017, hip-hop hasn’t gotten tired of “Computer Love.” Wiz Khalifa teams up with Ty Dolla $ign to do a super-modernized version of the Zapp classic.

If you are looking for the best place to buy beats online, you’ve come to the right place. License Lounge has the latest dirty south beats available from exclusive industry producers.